The beginning of the year is a traditional time to look forward to potential economic developments. Although forecasts can change due to unforeseen circumstances, the outlook for 2014 is generally positive, with a return to solid growth and the possibility of even stronger economic performance, depending on several key factors that should become clearer over the next few months.

Unemployment, a drag on the economy throughout the recovery, has begun to show improvement, dropping to a five-year low of 7.0% in November 2013.4 This trend is expected to continue, with unemployment averaging 6.3% to 6.7% in 2014 before dropping further in 2015 and 2016.5–6 More Americans with jobs could stimulate consumer spending, which represents almost 70% of GDP.7

Annual inflation was projected to be a relatively low 1.1% to 1.2% in 2013. The Federal Reserve expects the rate to rise slightly to around 1.4% to 1.6% in 2014, still short of the Fed’s 2% target rate for optimal growth.8 Although consumers may prefer no inflation at all, a moderate increase may bode well for the economy. 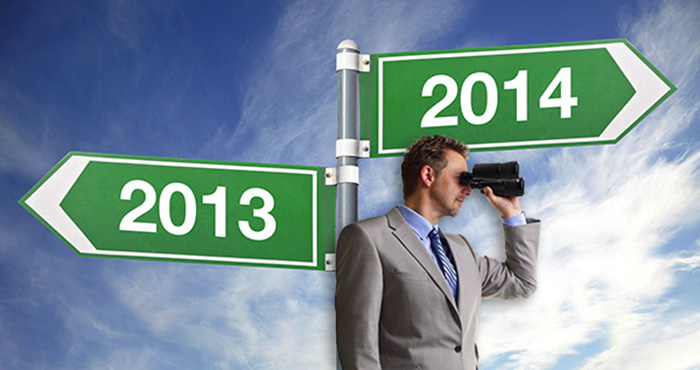 The federal government caused some short-term economic damage in 2013 by raising taxes in January, allowing across-the-board sequestration cuts in March, and shutting down the government in October.9 Although the economy seems to have weathered the tax increases and budget cuts, the shutdown may have reduced fourth-quarter GDP growth by as much as 0.6%.10

The good news for 2014 is that the bipartisan budget bill (passed on December 18) replaces some sequestration cuts with more targeted reductions, and approves spending limits for 2014 and 2015, thereby reducing the likelihood of another shutdown.11 A battle over the debt ceiling could still develop in February, but if that can be resolved without further damage, a more functional federal government may help stimulate economic growth.12

To stimulate the economy, the Federal Reserve has held short-term interest rates near zero for the last five years and increased the monetary supply through bond-buying programs called quantitative easing (QE). In a December 18 announcement, the Fed clarified its intention to maintain low short-term rates for the foreseeable future while beginning to taper its QE program in January 2014, reducing bond buying from $85 billion per month to $75 billion. This was only a first step, but the Fed indicated that further tapering should be expected if the economy continues to improve.13

Tapering had been widely anticipated by nervous investors, who feared negative consequences if the Fed turned off the financial faucet.14 However, the incremental approach — combined with clear communication and the assurance of low short-term rates — sent the stock market to new highs.15

Some analysts believe that ending the stimulus may be good for the market in the long term by reducing dependence on easy money and allowing share values to settle at more realistic levels.16

Initial response from the bond market was muted, with a slight drop in prices and a corresponding increase in yields. However, continued tapering could lead to higher long-term interest rates. This might benefit investors (including retirees) looking for returns on fixed-income assets, but it may increase interest rates on credit cards, auto loans, mortgages, and private student loans.17

A key issue for 2014 is whether U.S. businesses will increase investment. Corporate after-tax profits for the third quarter of 2013 rose to a record 11.1% of GDP, almost double the 6.1% average since 1929. However, businesses have been slow to expand due to reduced consumer demand and an uncertain economy. The improved unemployment picture suggests this may be changing. In a stronger economy, corporations may have to invest or lose market share. If corporate America does loosen the purse strings, more jobs could be created that will drive economic growth.18

Although it’s important to keep an eye on economic news, your investment strategy should be based on your overall objectives, time frame, and risk tolerance.

The principal value of all investments may fluctuate with market conditions. Stocks, when sold, and bonds redeemed prior to maturity may be worth more or less than their original cost. Investments seeking to achieve higher yields also involve a higher degree of risk.